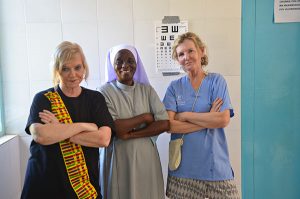 In January 2020, I travelled to Tanzania to help Eye Corps, a non-profit organization trying to reduce cataract blindness in underserved communities.  The group was largely composed of smart, hard-working, kind women who volunteer their time to help this organization.  They were nurses, scrub techs, doctors, medical assistants and folks like me with no medical background.  They travelled from all over to converge in Lindi, Tanzania to take time out of their lives to help others.  Every volunteer had a different story for how they became involved with Eye Corps; yet, a common thread ran through each of their stories: they believed in the Eye Corps system.  The goal of Eye Corps is to reduce cataract blindness.  They have a unique approach to this goal.  The week was spent pairing experienced surgeons, nurses, scrub techs, and medical assistants with Tanzanian counterparts.  This allowed for one-on-one training for each Tanzanian.  The goal was to leave at the end of the visit with each Tanzanian better trained and thus prepared to continue cataract care in their region long after Eye Corps had gone.

While I am confident that all medical assistance is valued in underserved communities, I was quite taken with the idea that the role of Eye Corps was not to solve the cataract problem in Tanzania but rather to empower the local Tanzanians to tackle this issue.  I did not understand this before I arrived in Tanzania and watched this group work.  What struck me as most remarkable about this group of women was the common thread that ran through all of them:  respect.  They had respect for each other; they listened to one another’s opinions and ideas.  When a decision had to be made, they thoughtfully shared their own ideas and then really listened to one another.  That feeling of respect percolated throughout the week and most importantly was shown to every patient that was seen and treated by Eye Corps.  I believe that it is respect that motivates Eye Corps to work the way they do.  They have respect for the Tanzanian medical professionals.  They understand that these men and women are eager to provide medical care in their own country yet are limited sometimes by lack of training and equipment.  I feel very lucky to have watched Tanzanian surgeons progress from observing at the beginning of the week to performing cataract surgery at the end of the week.  I watched the entire operating room be staffed by Tanzanians by the end of the week, with Eye Corps volunteers standing by.  I consider that a very successful trip!